For a positioned box, the ‘z-index‘ property specifies:

Values have the following meanings:

If there is no z-index specified, elements are stacked in the following order (from back to front):

In stacking context talk, the expression "in front of" means closer to the user as the user faces the screen.

In IE 6/7, any relatively positioned element that has haslayout set to true establishes a stacking context.

One may visualize this IE bug in the playground by setting [A] and [B] to position:relative, while [a] gets position:relative; z-index:1. Now, dragging [A] under [B] hides [a] – in Internet Explorer, that is. Any positioned child with a z-index is caught by this wrong stacking context of its parent. 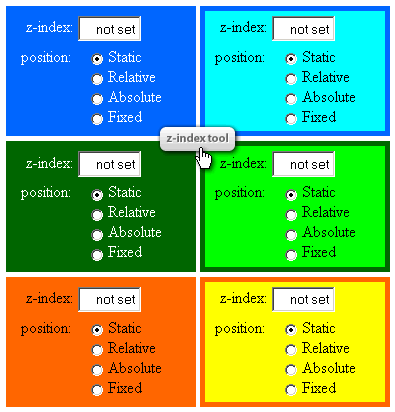